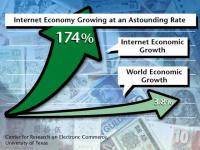 It comes to no surprise to many that I am an ardent follower of the economic trends and business models that are evolving online. Among other things this affords is a perspective on what happens when you take traditional media and services and move them online where the cost of production and friction for consumption starts to approach zero.

When we amortize most work over millions of consumers it becomes practical, and sometimes more profitable to make the product “free” and support it through advertising or ancillary sales. Because of this trend there is a growing expectation among some people that all content should be “free”.

I received a twitter today from Scott Sigler about an article on Cory Doctorow’s blog Boing Boing talking about Scott’s new book “INFECTED” being a “free download”, but “inexplicably limited”. Cory as usual has many good points, but I still feel that he is a bit harsh with regards to the publishers and what is appropriate at this point.

I have followed Cory’s work for a while and been terribly impressed by some of his forward thinking. His book Down and Out is a must read and a book I recommend to anyone who is trying to get a feel for the concepts behind a Free economy. No I don’t think we will be turning in our greenback for Wuffie any time soon, but I do think that we are gradually moving closer to an Entertainment Economy.

At this point monetization in many domains is still tied to retail. One of those industries is book publishing. Yes in time (probably a short time) book publishing will have to adapt to the new market realities or suffer a similar fate as the now maligned record industry. At the same time we are in a time of transition. Most people would still rather read their books on paper rather than a screen.

For now releasing a book for “free” online does not necessarily hurt the retail sales of the book and may actually strengthen it due to the strong network effect on book sales. For some books the smartest thing you can do is release an “free” version to prime the pump.

That said, the industry is going to change. When Apple released the iPod the record industry didn’t understand that Apple had changed the playing field. While previously people put up with the inconvenience of physical media, the iPod cut the chains and gave them a more convenient way of interacting with music. Physical media was dead, the record industry just didn’t realize it yet.

The same will happen soon for books. While there have been a few eBook readers that have been release and had a tiny amount of success, they have not been convenient enough to make a dent in consumer habits. The same was true for the predecessors of the iPod. In the same way there will come a product that will change that game.

I have seen a glimpse of that future on my iPhone and that future will be here any minute. It will take time for the change to really impact society as profoundly as the ipod has, but it will happen as the next generation again helps change how we think about media. When it becomes common place to have all of your books in your pocket on your phone it will change the game.

So in thinking about Cory’s post I wondered, if indeed that future is upon us, what will it look like? The model that is being pushed by the “free” believers is that you should release content for “free” and then expect people to monetize it via retail sales or donations if the consumer liked it. In this case the retail sales are dependent on the generosity of the reader rather than the previous gating of content via retail. In effect, even retail sales then becomes a Donation.

In this model less adept authors who perhaps relied on taking advantage of current culture or coining Memes to sell books, may find they can no longer compete. Content is king and the flood gates will be opened, if your book is boring fluff it is likely to not get donations.. and perhaps any attention at all.

At the same time, unless publishers hop in bed with the new portals and gatekeepers (iBooks, instead of Borders) they are likely to become irrelevant as the artists go directly to the gate keepers. Of course all of this is evolutionary. Even the record industry has to wake up to the fact that the new gatekeepers are the publishers and they have to fulfill a different role as marketers and managers to continue to add value for the artist.

I do not think that the “free” AKA donation-ware strategy will work for all content. We need lots of layers in the pyramid and not all models work everywhere. It will take time for this all to shake out, but it is going to be fun to help it along.

2 thoughts on “The Free Economy”