At almost 500 million active users and half of all internet users worldwide, Facebook is a “natural monopoly”.  It comprises over 75% of the internet users in the US.  If you are making social applications or games Facebook is effectively the only  game in town.

Some of my compatriots might worry about the reorganization of notifications and requests, but the elephant in the room is Facebook’s Credits.  Credits are an initiative to take control of the monetization of all apps on the platform by taking a Apple-sized bite of 30% of every transaction. This will effectively erase any profit for many companies.

END_OF_DOCUMENT_TOKEN_TO_BE_REPLACED 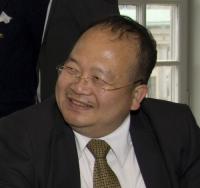 On June 25th Dr. Robert Lai (Mr. Lai Chi Tau) Chief Scientist of China’s Cyber Recreational District (CRD) passed away in his sleep at the age of 50. I met Robert at the Virtual Worlds Conference and Expo (VWCE) and in November I had the privilege to be invited by Robert to speak at the Virtual World Summit a part of the ICCIE Summit. As his guest I got to know Robert and came to regard him as a friend.

We all have aspirations great and small. Though he had lived his life as a scientist and teacher and was at that time the public face of the CRD, Robert’s dream was a modest retirement on a hillside in China. The CRD was to be his last task before relaxing and living the simple life. It saddens me to think Robert won’t get that chance. I hope he was dreaming that dream the night he left us in his sleep.

Robert was a man who you could not help but like. A man who you felt you could trust and who regardless of what happened around him would treat you with respect. He had an infectious love of life that was only tempered by the his role and place in the world. I will miss my friend Robert and how he represented to me the many sides of China as it enters this brave new world.

Farewell to our friend Robert, you will always be China to me.

I was saddened today when I came across a story about the death of Chuck Riechers, a person I had worked with and respected.

Chuck was a good guy who was incredibly smart and capable. One of the few straight shooters I know in Washington. He not only had a great reputation, but it was well earned.

I don’t know why he ended up killing himself. I know that the government can be a meat grinder, especially when you get to a high enough level. I got out of DOD contract work quite a while back to escape the drain it can be. I do not for a minute believe that Chuck did anything wrong. It just wasn’t his style.

No I believe that a good man got caught in the machinery of sensational news and government digression and his sensibilities made him do the “honorable” thing. It is a true shame when the system harms the true heroes it was put in place to support.

All that aside, I salute you Chuck and all that you were. I support your friends and family in thier morning and will always remember Chuck as the great guy that he was.