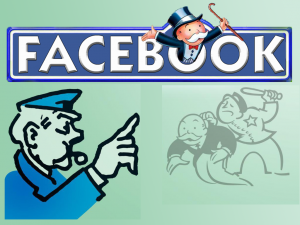 At almost 500 million active users and half of all internet users worldwide, Facebook is a “natural monopoly”.  It comprises over 75% of the internet users in the US.  If you are making social applications or games Facebook is effectively the only  game in town.

Some of my compatriots might worry about the reorganization of notifications and requests, but the elephant in the room is Facebook’s Credits.  Credits are an initiative to take control of the monetization of all apps on the platform by taking a Apple-sized bite of 30% of every transaction. This will effectively erase any profit for many companies.

It’s their platform.. why shouldn’t they?  If I were in their position I  would instead be wondering why they waited so long.   Was it because they knew that the bulk of initial investment in their platform was contingent on lower margins?  Did Facebook wait till the market matured on other people’s investment before deciding to take over the market?

An ecosystem of companies has been created around monetizing the Facebook platform.  Not the least of these are payment providers.  If as expected Facebook announces later this year that Facebook Credits are the only allowed  payment solution for apps, these companies will go out of business and the application developers who can afford to stay in business will be out a large chunk of change.

In effect Facebook, a monopoly, is using its platform to force its way into other businesses that rely on that platform.   We are also seeing preferential back room deals and purported arm twisting being used with Zynga to force adoption.  Simultaneously Facebook also wants to export their monopoly to the rest of the internet.  If you think  this feels a bit like the issues surrounding Microsoft’s and Intel’s anti-trust cases you are not alone!

I am not implying that Facebook or even Microsoft or Intel are evil.  I develop for all of these platforms and their existence provides the infrastructure for an entire ecosystem of businesses.  Platforms rock!

The reality is that it is the nature of business to push the edges of the legal system to achieve the best return for their investors.  It is the role of the FTC to push back when the companies start coloring outside the lines to ensure everyone has an even playing field.

Perhaps this is the real reason why Facebook is hiring former FTC Chief Tim Muris? With the agreement with Zynga sealed and Facebook still mum on their ultimate decision to require Credits, the FTC may be waiting for the other shoe to drop.

What do you think?