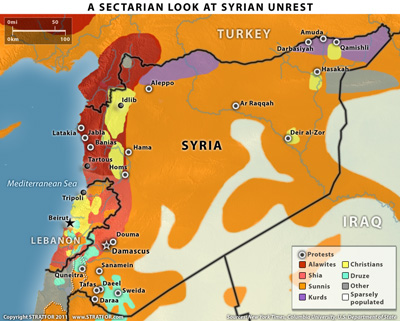 International politics is not a game for the faint of heart. The many machinations of the pawns on the chessboard is enough to keep you up at night wondering who is really playing who.

In a way the biggest problem is that this is all being played as a zero-sum game.  If one side wins the other must be losing.  In this winner keeps all scenario each country is playing for their goals without concern for the greater good.  Any concession is an admission of defeat.

The US has recently threatened to bomb Syria in order to eliminate Assad’s regimes capability to wage chemical warfare ostensibly on its civilians, but more importantly on other countries.  This coincides with an dramatic increase in military aid to the rebels.  Combined this would effectively institute a regime change in Syria similar to what happened in Libya.

Russia and Syria have countered with an offer to destroy all the chemical weapons, but only if the US stops arming the rebels.  This would in effect guarantee that Assad could destroy the rebels and remain in power.

Neither of these solutions look at the real problem.  Syria has major sectarian divisions.  These were in part created through the imposition of arbitrary country boundaries by the British at the end of WWI that did not take into account ethnic divisions.  The Alawite minority that Assad represents are justifiably fearful of what a Sunni majority government might do to them. While it is possible to have some stability in an area through inflicting strict police states such as in Syria, in the long term these dictatorships are precariously balanced and cannot sustain a democracy.

Instead of focusing on regime change, perhaps we should be focusing on long term stability.  Not through coercion, but through creating homogeneous electorates where the minorities are not fearful to the majority.  Instead of focusing on the zero sum goal of regime change, use the opportunity of this dialog to suggest that the US would indeed be willing to pull out of Syria, if the regime would agree to a plan to separate Syria into an Alawite State in the east and Sunni state in the west.  Where the predominantly Alawite areas would remain under Assad and the west would have it independance under Sunni rule.

This would give each group their own governance without oppression or  threat of genocide.  Isn’t that what we really need?

The above is probably, as Joshua Landis points out,  painfully naive, but so is the idea that regime change will result in a stable Syria.  Short of the above, it might just be better to accept the Syrian offer on face value, pull out of Syria with the knowledge that the region is safe from chemical weapons.